The signs of the zodiac begin with Aries. This is one of the spring zodiacal signs. Persons born under the sign of Aries are characterised as being determined and purposeful in putting their ideas into practice. They are very good both at expressing themselves and at self realisation. Their strong features are strength of personality and character.

They bubble with a zest for action. Patience, restraint and tact-fulness are not included in their strong points, but instead a healthy egoism and the ability to assert themselves in the world. Aries are honest and loyal; hypocrisy and guile are foreign to them. They are persons of action - not of long periods of reflection. As the representative of the 1st House, this star sign stands for our encounter with the world and the recognition of the individual "I" in distinction to the collective 'you".

The two of them are the first sign for each other in each case. Their relationship is characterised by a high degree of understanding and familiarity. An Aries can manipulate an-other Aries by giving him the feeling that he is completely infallible and is always right in his opinions - behaviour that inevitably leads to conflicts with his environment. An Aries knows that another Aries loves to be the center of attention and is keen on charging ahead. He can use this knowledge to his own benefit and incite him to such behaviour.

Here a particularly intensive effect is revealed. For the Taurus, the Aries is the 12th sign - he thus embodies a sense of mystery and being clouded in secrecy. The Aries is invariably a step ahead of the Taurus. He knows the weak-nesses of the Taurus - approaching life in a rather leisurely manner and being addicted to physical and material pleasures, while the Taurus admires the Aries for his courage and strength of personality. The Aries manipulates the Taurus by seducing him into activities, the consequences of which the Taurus is unable to measure. This may include drugs or risky business dealings - and also sexual seduction. From the perspective of the Taurus, something secretive and thus fascinating is inherent in everything. Quite deliberately, the Aries exploits the weaknesses of the Taurus for easy money, a comfortable way of life and all kinds of pleasures. The Taurus needs a secure environment and reliable relationships. The Aries seduces him into abandoning them and undergoing risks that can well be to the dis-advantage of the Taurus. As the Taurus's 12th sign, the Aries symbolises the potential loss of self at all levels.

For the Gemini, the Aries is the eleventh sign. Although Geminis have a wide range of interests and often possess a large number of talents, a Gemini lacks the single-minded-ness of an Aries. It is very easy for his inner compass to fall out of balance and for him to lose himself in his interests. As the Gemini's eleventh sign, the Aries encounters him as a friend, this resulting in the successful combination of their extremely different dis-positions. From the Aries, the Gemini learns to concentrate on his goals without becoming distracted. Nevertheless, the risk exists that the Aries will cause the Gemini to pursue interests that are not really his own but only benefit the Aries. Particularly since the Gemini often does not know what he wants, the clear line and goals of the Aries appear all too appealing to him-even though in the beginning he is not clear whether these goals are really his own.

The Aries can talk the Gemini into believing that he is not good or strong enough or indeed not able to live properly and therefore permanently dependent on the advice of others. By this means, the Gemini gains the impression of not being able to make decisions himself. The Aries sells him this under the premise that it is 'all for his own good.

For the Cancer, the Aries is the tenth sign. He encounters the sensitive and artistically talented Cancer at the level of the pursuit of success and this may have fatal consequences for the Cancer. The Cancer is fond of with-drawing into himself and can be emotionally hurt. He needs creative freedom in order to flourish. The Cancer has little resistance to offer against the strong personality of the Aries, who confronts him in the person of a superior, leader or other figure of authority, and can all too easily be dominated. As the Aries lacks understanding for the needs of the Cancer, he denies the Cancer the creative freedom of development, thus making him unhappy and depressed in the long-term. Rather than subtle manipulation, here we encounter the clearly recognisable dominance of the Aries over the Cancer, which the Cancer is only able to evade by withdrawal and distance.

The Aries encounters the Leo as his ninth sign. The Leo, as befitting a fire sign, virtually radiates energy and zest for action, and for this reason is a worthy opponent to the Aries. The manipulative potential of the Aries on the Leo is limited-instead it commonly manifests itself in a positive, reciprocal influence, in which the Leo experiences the Aries as a spiritual advisor who can help him keep his temperament under control. A latent tendency exists for the Aries to attempt to enthuse the Leo for ideological matters, but here the Leo does not allow himself to fooled by such spiritual restrictions for very long.

For the Virgo, the Aries is the eighth sign. Virgos are characterised by their strong sense of order. How they think and act is rooted in reality, and they are not prone to daydreaming. This is why Virgos usually come through crises relatively unscathed. It is different, though, if they are manipulated by an Aries. The Aries succeeds in shaking the Virgo's sense of reality and bringing chaos and disorder into his life. The Aries constantly attempts to persuade the Virgo that his perception is false and the way he deals with problems is not the right one. This denudes the Virgo of his self-confidence, intimidates him and triggers endless self-criticism. This results in the risk of his
psyche being destroyed. Virgos frequently feel attracted to Aries (a fire sign) and admire their resolve and determination. This is why they therefore take the Aries' criticism to heart and cast doubt upon themselves.

For the Libra, the Aries is the seventh sign. A strong attraction exists between Aries and Libra, which not uncommonly results in productive partnerships both in the private and business sphere. Libras loves beauty and aestheticism and has many good ideas that can prove successful, when combined with the determination of an Aries. However, it is not unusual for the Aries to envy the Libra for his inventiveness, and this may result in rivalries. The Aries can use the Libra's ideas as his own and go behind the Libra's back. Not withstanding this, the Libra finds it difficult to avoid the attraction that the Aries as the seventh sign exerts on him, so that this can lead to a strong love-hate relationship. The Aries manipulates the Libra by pretending to be his ally and partner, while all the time hatching other plans in the background.

For the Scorpio, the Aries is the sixth sign. This association is particularly complex, since although the encounter with the sixth sign stands under the heading "compromise', while the passionate Scorpio is known for not entering into compromises as well as being very belligerent. Nevertheless, the perseverance and tenacity of the Aries can still make him accept compromises in some cases. This can have a positive effect on the life of the Scorpio and act as a stabilising factor. At the same time, however, there is a risk of frustration and dissatisfaction mounting in the Scorpio to the extent that he feels a virtual prisoner.
This dissatisfaction can be discharged in the form of arguments and even violence. The Aries manipulates the Scorpio by forcing him into many compromises against his nature and emotionally blackmailing him. A Scorpio will, admittedly, rarely be happy in these circumstances.

The Aries is the fifth sign for the Sagittarius. The relationship between these two signs is primarily characterised by creativity, albeit only being a secondary factor for the Sagittarius. The Sagittarius is a thoroughly moral person, for whom a sense of honour, pride and reputation are extremely important. He tends to regard creative outbursts with suspicion. The Aries can induce him to cast aside this mistrust - at least for a while - and enter uncharted waters, this bringing new impulses into the Sagittarius' life. The risk of manipulation ensuing in this association is based on the danger that the Sagittarius will weaken his moral principles and will change under the influence of the Aries. The Aries achieves this by reproaching the Sagittarius that his convictions are false or by specifically damaging his reputation by spreading rumours.

For the Capricorn, the Aries is the fourth sign. Capricoms are characterised by their great ambition and pragmatism. They attach great value to diligence and discipline and unswervingly pursue their goals. In doing so, they risk missing out on the good and lighter sides of life. This aspect is intensified by contact with the Aries. The Aries makes the Capricorn believe that he can only attain his goals by pur-suing them along familiar paths. This way, he severely restricts the Capricorn's potential for success. The Capricorn is receptive to appeals to his awareness for tradition, and it is precisely this point that the Aries aims at. There are similarities between these two signs - both are of a determined nature and both possess a strong drive. However, while the Capricorn is more of a cool analyst, the Aries is-in contrast - an impulsive firebrand. He is able to give the Capricorn advice, not act in such an under-cooled way and look after his own family.

For the Aquarius, the Aries is the third sign. The two signs are often associated with a humorous and intensive friendship. They have fun together and celebrate their friendship in a grandiose manner. They mutually inspire and encourage each other. However, the Aries rarely tolerates sharing his place at the centre of attention with the Aquarius. For this rea-son, as his third sign he manipulates him by availing himself of hypocritical statements and rumours in order to damage the Aquarius' popularity and image. Aquariuses attach great value to friendships — indeed they are simply unable to exist without them. This is where the Aries' manipulation gets to work, by isolating the Aquarius through insinuation and spreading rumours, thus depriving him of his most important resources. As a result, the Aries is able to sun himself in the attraction of the Aquarius without having to fear that the other is superior to him.

For the Pisces, the Aries is the second sign.
Pisces are generally very sensitive and com-passionate in their nature. Because of their vulnerability, they often withdraw from the world in order to protect themselves. Although, as his second sign, the Aries em-bodies exactly the opposite with his dare-devil manner, Aries' manipulative power on the Pisces is quite insignificant. The Aries will attempt to fully win over the Pisces in order to tie them to him, but as he will never succeed in completely understanding the nature of the Pisces and their needs, such an attachment will rarely be of long duration. 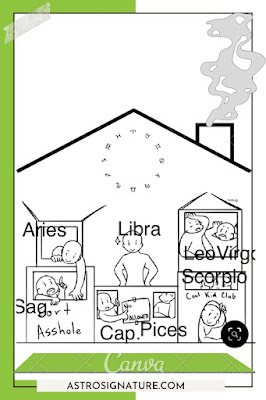