The time of the Scorpio begins at the end of October, an uncomfortable time of year. It gets dark early, fog hides the sun, and it is cold and rainy.

Summer is over, as is the golden beauty of early fall.
-
.
No wonder that this time of year is when we turn to thinking of the past, commemorating the dead and All Saints’ Day.

This is the time in which we come to understand that death is just as much a part of life as birth. People with the sign Scorpio... are characterized by a strong will, great adaptability, and toughness. They are able to handle crises by completely transforming themselves..

They take the cycle of life for what it is, and aren’t afraid of its darker side.

Scorpios have no interest in superficialities; they want to seek out truth instead.
-
.
They are decisive, and have great critical thinking skills and an almost inexhaustible will to work. They don’t do anything halfway. Once they’ve got a goal in mind, they pursue it stubbornly. This is also their weakest point: Once a Scorpio has an idea in mind, he can also be so fixated that he can’t let it go, even if it’s completely clear that the idea isn’t feasible. This means they often lose valuable time trying to accept a new idea, which they then devote themselves to with the same dedication. Scorpios are perfectionists who are always testing out their own boundaries and those of others. 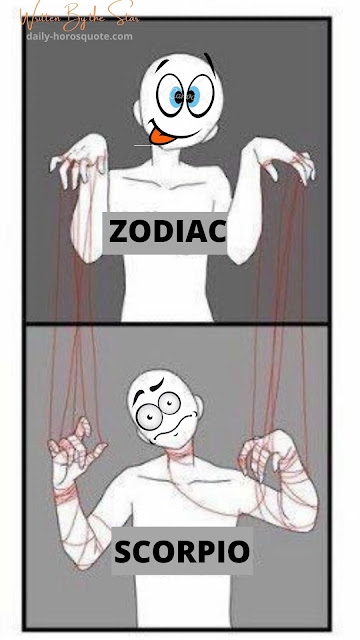 They see only “black” and “white,” and see nuances as nothing but hypocritical falsehoods. Once they dedicate themselves to a task, they fight relentlessly. Anyone planning to manipulate a Scorpio should be forewarned: If the Scorpio realizes they are being manipulated, there will be no way to soothe them. Also, they will see through heavy-handed manipulation immediately and punish it accordingly.
-
.
Scorpios don’t give second chances, and excuses won’t be any use once you’ve lost their trust. They represent the eighth house, concerned with crises of all types. Poverty, sickness, mourning, and loss characterize this house, along with the chance that something new may arise from the experience of crisis, allowing the sufferer to find themselves anew and strip away the old life like a shell which has grown too small.

have a difficult time abandoning either an argument or a challenge, and can’t stand walking away from a conflict without fighting it out. This is another gateway others can use to manipulate them. Gemini is the eighth sign for Scorpio, meaning it has the greatest manipulative power over them. At the same time, Geminis are confronting Scorpios on their home turf: dealing with crises.
-
.
Scorpios have no fear of crises, since they know their strengths and weaknesses very well, and know who they are. Gemini can be successful in manipulating Scorpios if they get lost in making suggestions, giving the Scorpio no concrete points of attack. If a Gemini and Scorpio are breaking up, for example, the Gemini can infuriate the Scorpio by repeatedly breaking off communications and making vague statements. On the other hand, as the 12th sign, Libra will interpret Scorpio’s decisiveness and belligerence as a weakness.

In Libra’s mind, Scorpio’s search for absolute truth and clear assertions can look like a childish or naive worldview devoid of any understanding of reality. This can cause Scorpios to feel uncertain. Scorpios feel drawn to Taurus, since this is their 7th sign. The two might have a thrilling sexual relationship, although Scorpios can see Taurus as boring due to their comfortable, down-home nature. Virgos will easily recognize Scorpios’ weaknesses and provoke them to arguments so that, for example, they break off contact with important people and family members. An Aquarian follows a similar approach if he wants to manipulate a Scorpio, primarily by trying to tone down his radical potential and induce him to more conservative goals. Sagittarius will focus more on his professional life.
-
.
Cancer and Pisces can have a calming or soothing affect on Scorpio, but they are difficult to nail down to clear positions, which irritates Scorpio. Scorpios need clear statements. As a Scorpio, you possess the best qualities for protecting yourself from manipulation. You are vigilant, don’t like compromises, and seek out the truth in all things. By nature, you are on guard for unwanted influences, and don’t like to let others get close to you. There are lots of things about you that you keep secret from everyone.

This helps keep you safe. Vigilance is advisable if someone refuses to make clear or binding statements or puts you off. The same is true for people near to you who want to egg you on to argue with other people, especially if there’s no chance for reconciliation. Be sure you’re the one choosing who you’re arguing with, and why.
Zodiac Season 2022
Ask me 1 free Question the answer Maybe written in the Star. So the question is, is it true? That the Present, Future, and Past are written in the stars? And in what way. Let me Explain to you via Reddit, see below