Ask me 1 free question zodiac-info@astrosignature.com
Scorpions are very passionate people who embody the principle all or nothing". They cannot bear ambiguity, nuance or hypocrisies. They fight, if need be, to the death so that the truth comes to light and others take a stand. It is no surprise then that they preside over the eighth house of the zodiac. Encounters with them are a particular challenge for each zodiac sign, because Scorpios put their cherished principles and practices to the test.

As always with the first sign, there is a deep mutual understanding here and an ideological agreement. Unfortunately, this is not always enough to establish a harmonious relationship between two Scorpios. Because both require absolute sincerity and are hardly diplomatic, it can cause serious conflicts. One Scorpio manipulates the other by either breaking through

his reserve by consciously betraying him - the worst offense for the Scorpio, for whom there is either all or nothing, friend or foe - or irritating his combativeness so that the Scorpio gets lost in senseless and nerve-wracking conflicts.

For the Libra, the Scorpio is the second sign. They meet on the material level of self-esteem, ownership and the need for security. This is about roots in the tangible world. Material possessions are not very important for the Libra. Spiritual and aesthetic values are more important to the Libra. Yet Libras have an often well-hidden, great need for security when it comes to their physical environment. If Scorpios wants to manipulate the Libra, this is exactly where they start. The Scorpio lay out scenarios that threaten the Libra's sense of the security, talks about money problems with the Libra that do not exist and builds on the Libra's inability to tackle problems in a specific manner.

Virgos are distinguished by their seriousness and strength of purpose. They like to learn, but not for the sake of learning, rather because they are pursuing a goal. They dislike redundant communication, such as small talk. The Scorpio can manipulate the Virgo by getting them involved in open communication battles, preferably in front of audiences. The Virgo abhors embarking into uncertain terrain and is unprepared to fall into such situations. But the Scorpio can also have a positive impact on the Virgo by teaching them the desire to learn for the sake of learning.

The Scorpio encounters the Leo as the fourth sign. This is about family and origin. The Leo's

family is very important to him. He likes to be generous and a strong protector. However, in return he also demands loyalty and recognition. If the Scorpio wants to manipulate the Leo, he challenges the Leo's instincts to protect the family honor. The Leo cannot do anything other than accept this challenge. Due to his hot temperament, however, the Leo is often inferior to the conflict-experienced Scorpio. The Scorpio succeeds in spurring on the Leo until close friends and relatives refuse him allegiance, which saddens the Leo deeply and claws away at his self-worth.

The Cancer is the fifth sign for the Scorpio. They meet on a terrain whether neither always feel quite well. It is about socializing, the joy of life and pleasure, but also about the superficial. The Scorpio is suspicious of relationships of this nature, because they have too much ambiguity. The Cancer can fully enjoy the relationships, but quick and superficial friendships are not the right thing for the Cancer. The Cancer looks for in-depth and lasting relationships with others.

If the Scorpio wants to manipulate the Cancer, then the Scorpio isolates the Cancer from acquaintances and casual friendships by claiming that these are all marked by hypocrisy and superficiality. This is due to the Scorpio's inability to recognize that contact with other people is about more than just friend or foe, black or white, but that there are real nuances. Furthermore, the Scorpio can manipulate the Cancer by reinforcing the Cancer's tendency to lose themselves in fantasy worlds and pipe dreams, thus abandoning the view of reality.

Geminis are characterized by a high mental agility and enjoying thinking. The same old and often arduous demands of everyday life are repugnant to the Gemini. The reality of life between breadwinning, housekeeping and obligations often appears banal and confining to him. At the same time, however, the Gemini knows that his life is often characterized by a lack of direction and a lack of strength of purpose. The Scorpio can convey to the Gemini that the solution to these problems is found in focusing on managing everyday problems. The Scorpio thus robs the Gemini of his mental agility and the strength to think in large con-texts and even in a visionary manner.

Scorpio and Taurus are the seventh sign to each respectively. Sparks definitely fly between the two, especially on a sexual level. However, the combativeness of the Scorpio is slightly too much for the Taurus. If the Scorpio wants to manipulate the Taurus, he incites jealousy, implicated him in unpredictable debates and thus plunges the Taurus into an emotional mess. It takes some effort to entice the good-natured Taurus from his reserve, but the Scorpio succeeds at this.

For the Aries, Scorpio is the eighth sign and therefore the one with the largest manipulative force on him. The Aries likes to tear ahead and hates being condemned to inaction. The Aries likes to tackle problems directly and can only rarely be confident that they will solve themselves. The Scorpio as a manipulator reinforces this tendency. But rash actions can exacerbate problems even further, rather than solve them, and sometimes-diplomatic action is the right action, but the Scorpio and Aries are incapable of this.

Pisces are characterized by their sensitivity and their uniformity. While they have their views on topics such as religion and philosophy, it is not important for them to enforce them in disputes. It is precisely this differentiation that is contrary to the opinions of the Scorpio. This can result in a corresponding conflict on the one hand and, on the other, the withdrawal of Pisces from the Scorpio, since the Scorpio's brash attitude is alien to the Pisces. The Scorpio may succeed in manipulating the Pisces by reinterpreting the Pisces' reservation in matters of faith and religion as cowardly and isolate the Pisces this way. For the Pisces, isolation is the worst punishment and an effective means of manipulation.

Aquariuses love extremes. They want to enjoy life fully with all its ups and downs. Freedom is a great commodity for the Aquarius. And professionally, they need a lot of space and find it rather difficult to subordinate them-selves. Scorpios again can be very dominant superiors, whether at work, in associations or in politics. If they want to manipulate the Aquarius as such, they only need to over-whelm him with meaningless tasks, which he is required to accomplish on account of the ruling hierarchy. The Aquarius will soon give up and look into the distance.

Sagittarius tends to idealize his relationships with other people. Therefore, it is not easy for him to see through the Scorpio who is trying to manipulate him. The Scorpio has good cards when giving the Sagittarius the impression that, because of his adherence to principles, he has the right to be hurtful and inconsiderate to-ward others, a tendency that has already been created in the very nature of the Sagittarius and can be exacerbated even further by the Scorpio. 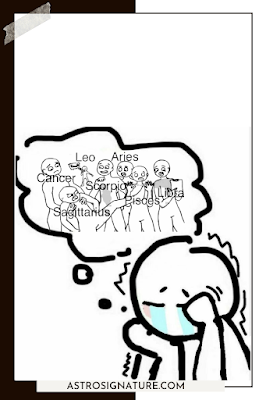 What are your lucky astro colors?

Color is vibration, the basic energy form underlying all of creation. Color is an essential ingredient in our daily environment. Not only does it communicate emotion and create a mood, but also it has the power to affect our energy levels. In this way, seeing a color and experiencing a color are virtually inseparable, because much of what is seen is also felt. People react to colors, because they evoke personal emotions and experiences.