Mars is the planet of conflict, and the eighth house is the one of shared resources and intimacy.

Think you'll have a dust-up or two with the people closest to you during this two-and-a-half-month period? Yeah. So do I. Mars symbolizes the impulse to take what's yours and to make things happen the way you want them to.

Mars transiting your eighth house can be healthy and beneficial if you've given too much power, too many decisions, and too many resources to other people; this will be a period of correcting any imbalances and reclaiming what's yours.

But usually they won't just hand you a check or say, "Yes, you're right, these are your decisions to make." So there will be conflict. It might be about handling the money or property you share with others, or fighting for an insurance settlement or inheritance that is owed to you.

It can be exhilarating to cut through the often hazy territory of intimacy to say, This is what's really going on, this is how I see it, and this is what I want from you." Exhilarating, and kind of scary. You can let this window of opportunity close without doing anything, but these conflicts are not going away—merely going underground. Better to resolve them now, while Mars is on your side.

THE EIGHTH HOUSE: WHAT'S YOURS IS YOURS AND COULD BE OURS

Shares common ground with: the sign of Scorpio; the planet Pluto

Ask someone if she feels she has received the support she deserves in life, and you're talking to her eighth house. Someone with difficult planets in this house will usually say that no, she's done everything for herself because no one else will help out. Someone with nice planets here, on the other hand—say, Venus or Jupiter—has often had a lot of help from others and may even feel a little guilty about it, 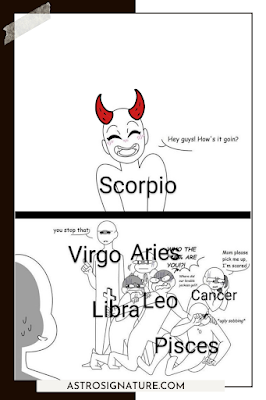 Sexual activity ended up here because it's where one person's  assets are comingled with another person's assets. And while the French refer to an orgasm as la petite mon (the little death), there is a more direct connection between death and the eighth house. It may or may not refer to actual, physical death. (I think that is more likely the purview of the fourth house, but I confess that I deliberately skipped that lesson in astrology school, as I'd prefer my own death to come as a surprise.) But it certainly challenges our notions of mortality and the mystery of what comes after life. The eighth house is where you'll find all manner of experiences that transform you from one person into another.