When the Sun is in the 11th house of Solar Return, the individual begins to question life, norms, rules, laws, and social expectations.

The Sun is in the "house of why not?". Betty had been married for a longtime and had worked for her husband in a real estate business during most of their time together. At mid-life, Betty decided to take flying lessons. She wanted to do something different and fun. It turned out that she loved flying. She also fell in love with her flight instructor. He was much younger than she and married.

Ultimately, they had an affair. It was at this point that Betty left her marriage, left the real estate business, and began to sell planes as a career.

We can see the profound pull between the two groups of planets in the 11th and 5th houses. Oppositions between these houses traditionally indicate a conflict around the question, "Are we lovers or are we friends?". A change in profession is noted by Uranus in the 6th house. The affair was rocky, and there was

never any mention of marriage. Neptune in the 7th can show undefined relationships. Betty paid a price for leaving her marriage. She also lost a lot of couples-oriented friendships during the year. The following year when the solar return Sun moved on to the 8th house, Betty divorced her husband. 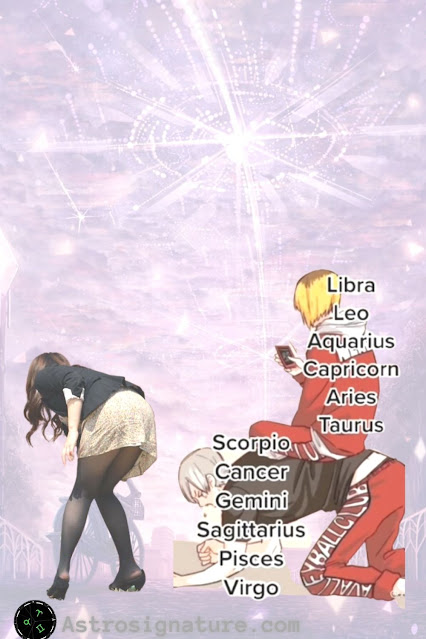 What to Expect for this Month Ahead of 2021 zodiac-info@astrosignature.com
Email ThisBlogThis!Share to TwitterShare to FacebookShare to Pinterest