The Moon and the Cycle of Change in Solar Return chart

The solar return Moon seems to have two consistent themes throughout all of the houses. First and most simply, the Moon is associated with change and fluctuation ac-cording to its house position.

Secondly, and probably more importantly, the Moon reflects the individual's emotional nature during the solar return year. Feelings, temperament, and emotional needs can be assessed by the Moon's placement, sign, and aspects.

Certain themes normally associated with the Moon are not consistently related to all of the houses. For example, themes concerned with the home may be seen with the Moon in the 2nd or the 4th house, but generally not when the Moon is in the 7th.

If you want to know when to expect the major transition periods of your life, consider the cycle of the transiting outer planets learn more here..

The Moon and the Cycle of Change

Change as a natural process is normally implied by the Moon. We think of ocean tides and lunar cycles as natural changes occurring in a rhythmic pattern. The Moon in the solar return also seems to indicate a natural cycle of change.
The Moon moves through the solar returns in a steady counterclockwise progression, moving approximately one or two houses per solar return year. If your Moon is in your solar return 5th house this year, it was probably in  the 3rd or 4th house last year and may be in to year. the 6th or 7th house next year.
ASTROLOGY OF 2022: How to plan your Year
If you're like many people, you welcome each new calendar year with resolutions, planners, and a big-picture time line for what you'd like to accomplish in the year ahead. If you'd like a little help from astrology, here are the most relevant cycles to keep in mind.
The year itself is based on the Sun's complete journey through the zodiac...  Learn More.. 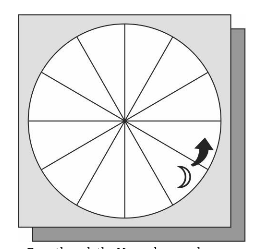 Even though the Moon changes degrees each year, approximately 100 degrees forward in the zodiac, it is sometimes possible for the solar return Moon to remain in the same house for two years in a row. The Moon skips some houses entirely. The Moon's cycle around the solar return chart takes approximately eight years. This rhythmic pattern occurs if the individual remains in the same location from year.
The Moon as an Emotional Indicator , The Moon's sign can be important even though the Moon has essentially only nineteen placements, because it is indicative of what the individual feels during the year and how he or she is most likely to exhibit those feelings. See For example
This lunar cycle suggests that change occurs in a set sequence, and the sequence is understandable. For example, if you have the Moon in the 1st house this year, it will probably be in the 2nd house next year. This pattern logically implies that you must become aware of your own specific emotional needs (Moon in the 1st house) before you stand up for yourself and make demands. Self-worth issues (Moon in the 2nd house) are supported by an accurate assessment of your needs and whether or not they are being met by others. Suppose your Moon now moves from the 2nd house to the 4th house. The need for financial security recognized while the Moon was in the 2nd may lead you to purchase a home as an investment (Moon in the 4th house). If instead the Moon moved from the 2nd to the 3rd, a lack of security in your old home may prompt you to investigate new, safer neighborhoods (Moon in the 3rd house).
Each year is a continuation of the last year, and last year's successes become this year's foundation for future advancement. In the same way that the zodiac proceeds from Aries baby to Pisces Good Samaritan, the Moon in the solar return chart proceeds from emotional self-knowledge (Moon in the 1st) to Universal compassion (Moon in the 12th). The Moon by its house placement indicates where evolutionary emotional growth is taking place. The individual experiences this maturation process as changes in circumstances. Unstable situations and fluctuating feelings are likely, but normally changes are minor. Major changes and disruptions are more often suggested by Uranus and/or Pluto.

SOLAR RETURN CHART BASIC : from first house to 12 house ...
From year to year, the Sun passes through the Solar return chart in a clockwise direction, falling into every third house for those people who remain in the same location. For example..

MOON IN FIRST HOUSE in your Yearly Horoscope

Feelings and emotional needs will seem stronger and more urgent, residing just under the surface. But the Moon in the 1st house is distinguished by the fact that not only are the feelings particularly strong.. 👉 Learn more...

MOON IN 2ND HOUSE Of your yearly Horoscope

In order to feel comfortable during the next year, it is important for you to review your financial situation and formulate plans which will increase or ensure economic stability. This financial plan ... 👉 Learn more...

You are apt to either change your place of residence or change something about your home when the Moon is in the 4th house of the solar return chart.. 👉 Learn more...

The start of a new romantic relationship is the most common event associated with the Moon in 5th house of Solar Return.  👉 Learn more...

MOON IN 6TH HOUSE Of your yearly Horoscope

job changes are usually minor. The Moon is more closely associated with adjustments rather than major upsets. Some appropriate examples of these minor changes might be:.. 👉 Learn more...

MOON IN THE 7TH HOUSE Of  Your Yearly Horoscope

you may be very involved with your boss's personal needs and comforts rather than clerical duties. If you are a physician seeing patients, you will be very concerned with your patients as individuals... 👉 Learn more...

MOON IN THE 9TH HOUSE of your Yearly Horoscope

The Moon placed in this house suggests a good time to reevaluate all beliefs in light of practical applications to daily situations. We think of the Moon as... 👉 Learn more...

MOON IN THE 8TH HOUSE Of Your Yearly Horoscope

The 8th house is the house of acute awareness of emotional forces and psychological powers. Nearly all of this awareness will result from a newfound ability to spontaneously... 👉 Learn more...

MOON IN THE 10TH HOUSE of your yearly Horoscope

MOON IN THE 11TH HOUSE of your yearly Horoscope

You might have to work toward your goal despite much opposition and lack of assistance from family members. For example, a woman with the Moon in the 11th started her own cottage industry ... 👉 Learn more...