The Uranus cycle can be divided into four segments of about twenty-one years each. Each of these segments represents an important phase of the cycle—initiation, cultivation, review, and adjustment.

It is a story of dissatisfaction with the status quo. It is a story about learning to celebrate the untamed, eccentric, one-of-a-kind you.

Your Most Luckiest Day for this Month Ahead

Astrology might have some answers base on your Solar Return Chart. 👉 Just Fill up this form , Or by Direct E-mail - Zodiac-info@astrosignature.com

On the day you were born, and on the day any important event happened in your life, Uranus occupied a specific degree of a particular sign. About every eighty-four years, Uranus returns to that degree of the same sign, called the Uranus return. 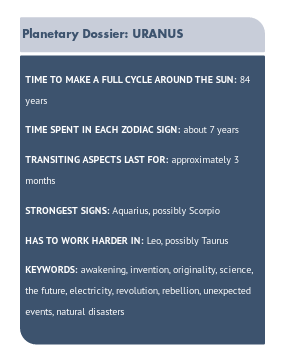 At twenty-one, we all experience the first square from transiting Uranus to our natal Uranus position, and most of us go a little bit nuts. We cut our hair in some extreme way, move far from home, get involved with bad relationships and sketchy behavior.

There is often the unsettling feeling of no longer knowing who you are or what you want from life. But there is a positive impulse at work here too: the desire to throw off the rules and constraints with which you were raised and claim a life that is uniquely yours. Everything seems possible, past restrictions are thrown away with both hands, and if you wish to, you can create a life that’s absolutely different from the one you inherited from your parents.

When you experience transiting Uranus’s opposition to its natal position, you’ll be about forty-two years old—truly middle-aged. The need for rebellion is still strong, but the pressures to act out or the ways of doing so are usually pretty different.

Oh, people who’ve walked the straight and narrow for twenty years might cut loose and perform the sad little midlife crisis drama—ditch the older partner for the younger one, get a red sports car, whatever. But most of us have a quieter sort of awakening.

One that says, “Yikes, I really am not getting any younger, am I?” I had my Uranus opposition when I was a forty-two-year-old college junior at a state university. I spent my days sitting in lecture halls with people who were having their Uranus squares. It was the perfect setting for a midlife crisis, actually, because Uranus transits call for an examination of the ways we don’t fit in, and I certainly didn’t fit in there. But unlike at the Uranus square of age twenty-one, at the opposition you know who you are. You just don’t know whether you want to be that person anymore.

When you’re about sixty-three, transiting Uranus makes one last square to your natal Uranus position. Traditionally, this was the age when most people began their transition into retirement. Today, many people are choosing to remain in the workforce well into their sixties and even seventies, for financial reasons or simply because they still feel they have plenty of energy and wisdom to contribute. If you do transition out of the workforce at this age, the new freedom may be disconcerting.

Living life without your usual schedule, rules, and social infrastructure is a huge adjustment. However confining your life may have been, the freedom to spend your days in any way you choose can be overwhelming at first. Since Uranus is also associated with social networks, it can be helpful to cultivate at least one or two group-centered activities to help keep you connected and involved.

Uranus returns to its position in your natal chart only once in your lifetime, when you’re at age eighty-four. It’s only recently that an upward trend in longevity has made it more common for individuals to experience a Uranus return.

If you are lucky enough to reach your Uranus return, it can be a time when you reinvent yourself one last time, particularly if you enjoy reasonable health and financial security. This time, the urge for freedom manifests itself as a rejection of societal preconceptions about old age. It may be necessary to fight for your independence and freedom to live on your own, or at least on your own terms.

Astrology might have some answers base on your Solar Return Chart. 👉 EMAIL: zodiac-info@astrosignature.com - you can ask me 1 free question, Just fill up this form...